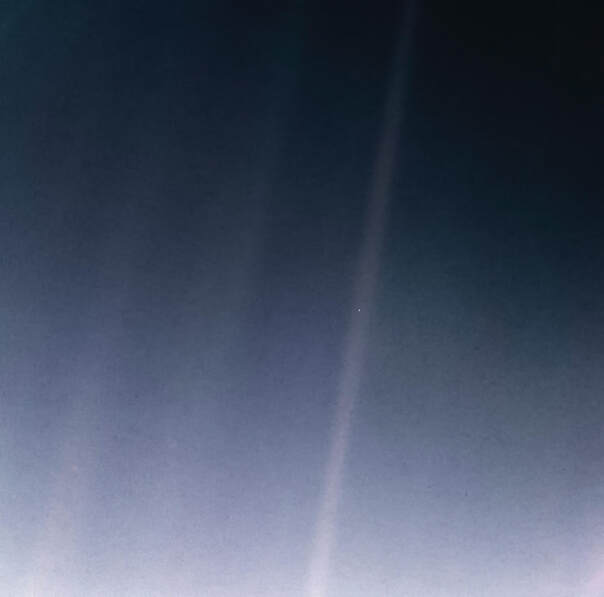 Portrait of the Earth - a pale blue dot NASA
​"Look again at that dot. That's here. That's home. That's us. On it everyone you love, everyone you know, everyone you ever heard of, every human being who ever was, lived out their lives... on a mote of dust suspended in a sunbeam.

The Earth is a very small stage in a vast cosmic arena… Our posturings, our imagined self-importance, the delusion that we have some privileged position in the Universe, are challenged by this point of pale light.​
​In our obscurity, in all this vastness, there is no hint that help will come from elsewhere to save us from ourselves…

​It has been said that astronomy is a humbling - and I might add - a character-building experience. There is perhaps no better demonstration of the folly of human conceits than this distant image of our tiny world. To me, it underscores our responsibility to deal more kindly with one another, and to preserve and cherish the pale blue dot, the only home we've ever known.”
​​
Excerpted from "Pale Blue Dot" - Carl Sagan 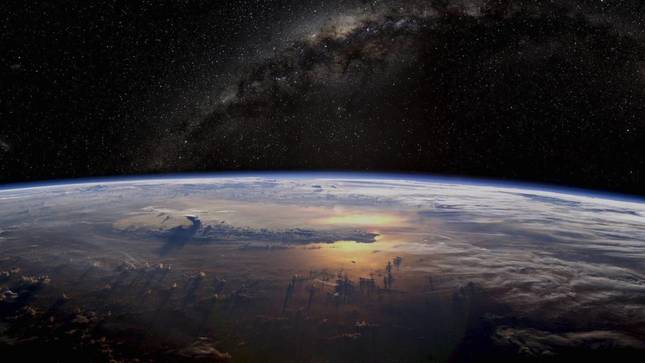 ​
Our planet is a tiny speck in an immense void of interplanetary space.  Our Sun is one of 200 to 400 billion other stars in our Milky Way galaxy. The Milky Way galaxy is one of over 2 trillion galaxies in the visible universe.

The Hubble Ultra Deep Field is an image of a small region of space in the constellation Fornax, approximately one tenth of the angular diameter of a full moon viewed from Earth, and equal to roughly one thirteen-millionth of the total area of the sky. The small patch of sky in which the galaxies reside was chosen because it had a low density of stars in the near-field. It contains an estimated 10,000 galaxies:​ 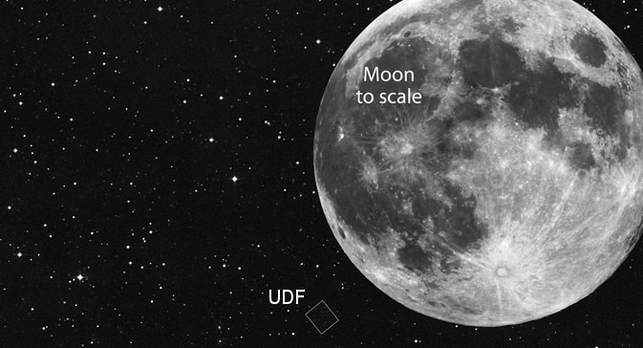 Looking at this small area with of thousands and thousands of galaxies, it is amazing to recall that until less than 100 years ago, many astronomers believed that the Milky Way was the only galaxy in the Universe. The possibility of other galaxies had been debated previously, but the matter was not truly settled until Edwin Hubble confirmed that the Great Andromeda Nebula was in fact far too distant to be part of the Milky Way. 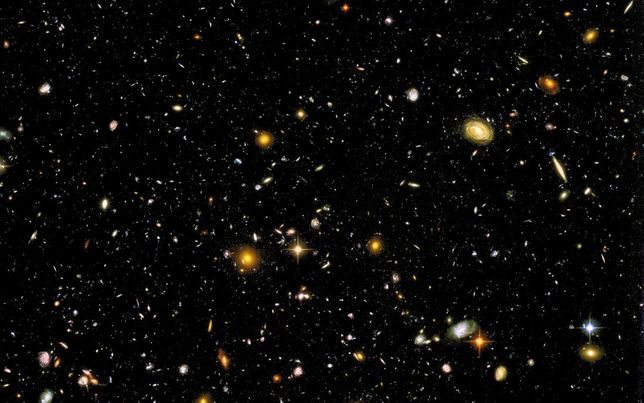 The James Webb Space Telescope has now greatly expanded our view into the universe, with a look back to just 600 million years after the Big Bang 13.78 billion years ago. Above is shown a comparison the galaxy cluster SMACS 0723 4.6 billion light-years distant, taken over a period of 22 days by the Hubble on the left, and the Webb 12 hour exposure on the right. Each covers an area of the sky about the size of a grain of sand held at arms length. The Webb reveals thousands of more distant galaxies in the background, some of which are gravitationally lensed and distorted by dark matter in the foreground galactic cluster. More on the Webb's First Deep Field Image can be found below and here.
​
The following resources offer a way to help visualize - at least partially - the otherwise impossible-to-grasp immensity of the Universe.

First, discover that while the speed of light seems very fast at  299,792 kilometers per second (186,282 miles per second), on the scales of interplanetary space (and beyond) it is exceedingly slow:
​
You can also view a visual tutorial on the true scale of the Solar System. The speed of light is activated by the spiked "c" symbol, and again demonstrates how long it takes for light to traverse the relatively very small distances within the Solar System.
​The Earth imaged from Saturn by the Cassini spacecraft, 1.27 light-hours away: 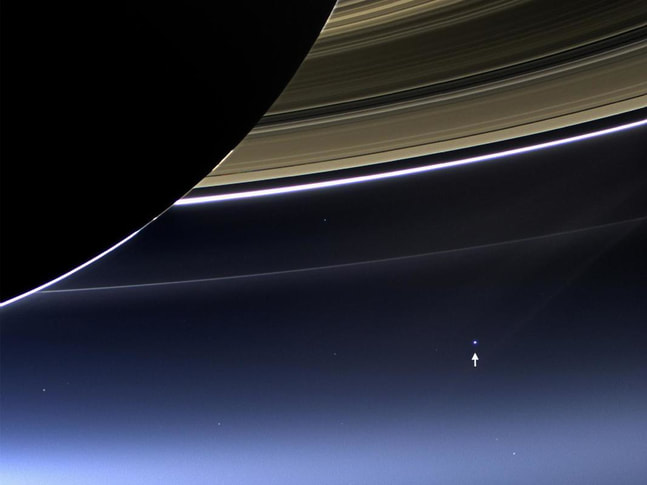 ​Next, lets look beyond our solar system, to the scale and distances from the nearest stars and out to the Milky Way galaxy:
These video's discuss our home galaxy, the Milky Way:
​On the largest scales stars are organized into galaxies, which in turn form galaxy groups, galaxy clusters, superclusters, sheets, walls and filaments, which are separated by immense voids, creating a vast foam-like structure sometimes called the "cosmic web":

​The visible universe is unimaginably large, and stretches in every direction at the limit of the speed of light to the beginning of the universe 13.772 billion years ago. The Sloan Digital Sky Survey has released a new interactive map of the visible universe described in this video:
The Scale of the Universe
​​​
Based on the 1977 short film Powers of Ten (Powers of Ten: A Film Dealing with the Relative Size of Things in the Universe and the Effect of Adding Another Zero) the Cosmic Eye version is a contemporary update:
This scale of the universe video is more complete in going down to the smallest scale known - the Planck length. An informative set of short videos for the curious (including number 98 on the Planck length) can be found at ​Sixty Symbols.

Besides Sagan's original, and Tyson's remake, of the Cosmos series, one of the best video series on the nature of the Universe is Brian Greene's The Fabric of the Cosmos. Highly recommended!

The Fate of the Universe
​
The fate of the universe depends on how dark matter and dark energy affect the overall space-time geometry. The age of the Universe is 13.8 billion years. Because the speed of light is finite, we can't see anything that is so far away that light would have taken longer than that from us to reach us. However, due to the expansion of the Universe, these objects are now 46 billion light years away. For what most astrophysicists consider to be the likely versions of dark matter and energy, the Universe will keep expanding forever, with clusters of galaxies getting ever more and more separated. This is true whether the geometry of the Universe is flat, open, or closed.​​ 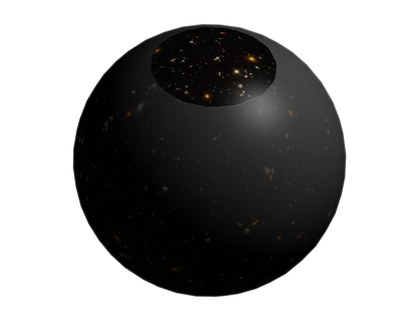 ​In this picture showing a closed space-time geometry, the surface of the sphere is meant to represent the whole Universe. The parts that are "grayed out" are outside our observable Universe; the patch at the top that you fully see is the observable Universe. The radius of curvature of this universe is 120 billion light years. Its circumference is 760 billion light years. ​Remember, though, that this is the minimum size of the Universe given current data. Most astrophysicists suspect that the Universe is really much larger than that, and indeed may well be infinite. Dark matter and dark energy affect both the shape of the Universe and its ultimate fate, but they affect it differently. Exactly what will happen to our Universe may depend on the details of what dark matter and energy really turn out to be...
​The James Webb Space Telescope is the successor to supplement the Hubble Space Telescope, and is part of NASA's Next Generation Space Telescope program, developed in coordination between NASA, the European Space Agency, and the Canadian Space Agency. Its super-sensitive infrared capabilities will allow it to image even farther back into space and time, gathering data which may reveal fundamental knowledge related to dark energy, dark matter, and the evolution of the universe. 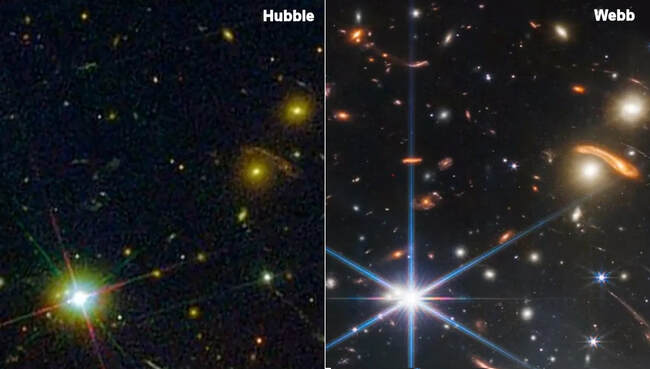 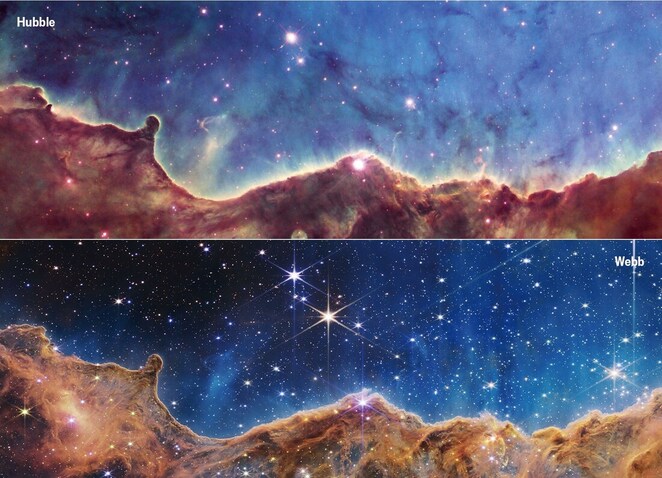 The James Webb Space Telescope is our latest tool to decipher an understanding of our universe. The images above show the improvement in resolution and detail compared the the Hubble Space Telescope. Because the Webb images infrared wavelengths, it can "see" farther into areas of space that are invisible due to obscuring dust at normal wavelengths of light. Note that many of the stars in the Webb image are invisible in the Hubble image. And because its mirror is much larger, the resolution of the Webb images are much higher.

But it's not just stars and galaxies that JWST is revealing new and stunning images. Below In a wide-field view, Webb sees Jupiter with its faint rings, which are a million times fainter than the planet, and two tiny moons called Amalthea and Adrastea. The fuzzy spots in the lower background are likely galaxies “photobombing” this Jovian view. 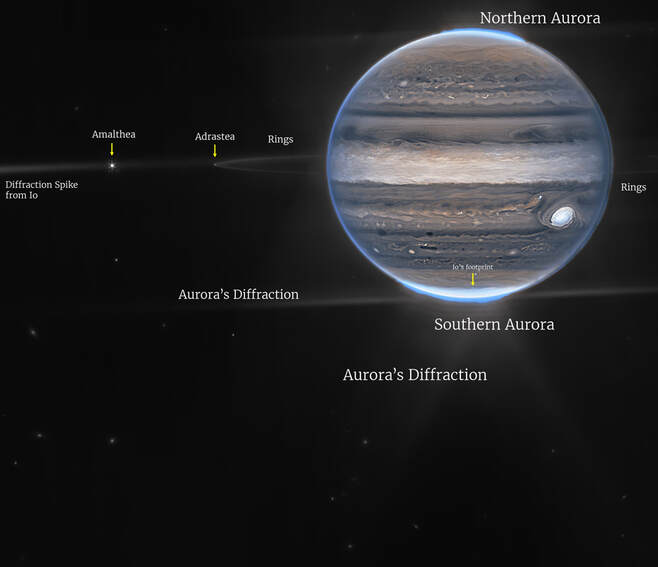 Credit: NASA, ESA, CSA, Jupiter ERS Team.
More of the stunning images and science being revealed from the JWST can be found here.
Gravity Waves

Gravitational waves were a prediction of Einstein's theory of general relativity. They travel at the speed of light (300,000 kilometers - 186,000 miles - per second), and result when massive neutron stars and black holes which orbit each other coalesce into a single object. These waves squeeze and stretch anything in their path as they pass by. A gravitational wave is an invisible ripple in the fabric of space-time. The dimensional changes caused by a gravity wave are exceedingly small, and hence very difficult to detect.
Another tool that has become available to science is the gravitational wave observatory. Currently there are several operating around the globe. Two are cutting-edge Laser Interferometer Gravitational-wave Observatories (LIGO) - with more planned for around the world. The monumental decades-long task of detecting gravitational waves was achieved right in our back yard at the LIGO facility at Hanford, Washington. The principle investigators for this project and discovery were awarded the 2017 Nobel Prize in physics. Below are a couple of video's that explain the astounding feat and how LIGO works.