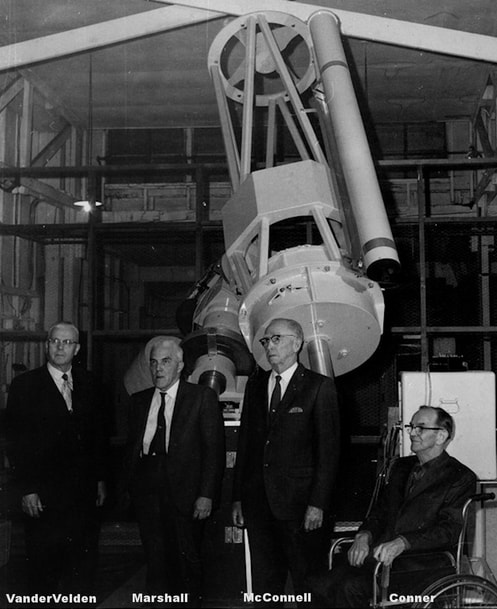 ​The Goldendale Observatory 24 inch telescope and its builders -
Clark Junior College, Vancouver, WA., circa 1970.
Set on a hill just 1 mile (1.6 km) north of the center of Goldendale, this Washington State Park Heritage Site has attracted hundreds of thousands of visitors since its dedication in 1973.

The Goldendale Observatory resulted largely from the efforts of four amateur astronomers based at Clark College in Vancouver, Washington: Don Conner, Mack McConnell, John Marshall, and Omer VanderVelden, who started in 1964 to construct what would become the largest amateur-built telescope of its day. It was originally intended to replace a 12 inch telescope they had previously made for the College. That instrument got Clark College interested in a much larger telescope, and the College purchased the 24.5 inch (62 cm) diameter 5 inch (13 cm) thick 200 pound (90 Kg) Pyrex disc to make the primary mirror. VanderVelden, a machinist made the mounting, electrical engineer John Marshall built the controls, and M.W. McConnell and Don Conner, both amateur telescope makers (ATM's), ground and polished the optics.  They volunteered nearly six years in building the telescope; and Clark College contributed over $3,000 for materials ($25,000 in today's dollars). At the time of its completion in 1970, the telescope was valued at $50,000 (about $350,000 today). However, due to the at times less than ideal weather conditions and the night sky being "too light polluted" by nearby Portland and Vancouver, it was realized the telescope could not be used to its full potential if it was sited on the college campus. Clark College sought a better location for the instrument which would remain relatively close to the Portland-Vancouver metropolitan area. Locations just to the east of the Cascade Mountains along the Columbia River were prime contenders for the telescope due to the relatively clearer and much darker skies, as well as good highway access.

While driving through the Columbia River Gorge area, Marshall and Connor stopped at a Goldendale restaurant - a two hour drive east of Vancouver - were a discussion with the owner (city councilman John Toll) resulted in a meeting with Mayor George Nesbitt, who expressed an interest in having the telescope. A follow-up meeting was arranged and Marshall, McConnell, and VanderVelden met with Mayor Nesbitt, Toll, Pete May (editor of the Goldendale Sentinel) and others. Soon it was agreed that Clark College would supply the telescope if the City would supply the site and observatory building. Even though Goldendale was relatively small, there were concerns about "too much light emitting from the town's lights" affecting the telescope. The City leaders promised to build an observatory for the instrument, and that they would enact lighting regulations to protect it from light pollution. The non-profit  Goldendale Observatory Corporation, led by a volunteer board of directors, which included the telescope makers and Clark College representatives, formed to solicit grants and donations to build the facility to house the telescope.

The Corporation anticipated the Observatory's mission would be for use by the general public, amateur astronomers, local schools, and regional college’s student learning purposes, including dark-sky object photography and photometry of stars and nebulae. Funds for the building (80%) came via a federal grant of $156,000 (about one million dollars today), and a smaller bank loan and donations paid for the 20% matching funds. Clark College then donated the 24 inch reflecting telescope to the City of Goldendale -- the designated recipient for the federal funds. The Observatory design was based largely on the University of Washington's Manastash Ridge Observatory built west of Ellensburg, Washington, in 1972. The Goldendale Observatory was then built over a period of several months and dedicated on October 13, 1973. Congressman Mike McCormick, in a keynote address, dedicated Goldendale Observatory "to the telescope builders, the people who worked to make the observatory a reality, to the scientists who came before it, and those who will 'seek the truth' as a result of it." The distinguished crowd, including observatory directors and members, mayors, city and county counselors, college presidents, professional and amateur astronomers from all over the northwest, and other guests, rose in a standing ovation as Don Conner struggled up from his wheel chair. With Don's hands trembling, and with Mac, John, and Van at his side, Don was helped to the eyepiece of the telescope for his first look into space from the new Goldendale Observatory.

The Corporation leased the Observatory from the City and agreed to provide for its operation. Unfortunately, the Observatory closed immediately after opening, as no funds were left to operate the facility. It sat mostly idle (except for occasional public use supported by a small group of amateur astronomers in Goldendale and others from Portland-Vancouver and Seattle) for over two years. The Corporation then was able to hire full-time director William Yantis who had degrees in astronomy and physics from the University of Washington. The Observatory emphasized the use of the facility by the public, schools, and amateur astronomers. It included a kitchen facility for overnight stays, and had a darkroom for processing photographs taken with the instrument. The Observatory offered presentations by amateur astronomers and experts in science and astronomy, showings of science films and hosted public speakers, science workshops, and classes in telescope making and photography.

The Goldendale Observatory became famous with the February 26, 1979 total solar eclipse, as thousands of visitors and the news media descended on the town of Goldendale for the event, and NBC-TV donated $500 (about $1900 today) to the Observatory for the privilege to provide live television broadcasts of the eclipse to the nation from the Observatory. The Astronomical League held their annual gathering of amateur astronomers in Goldendale specifically for the eclipse, and they shared their telescopes with the public. The large amount of attention for the Observatory accompanying the 1979 eclipse also put new pressure on the City of Goldendale and surrounding Klickitat County to finally adopt the lighting codes which were promised years earlier to protect the night sky for the telescope.

The Corporation continued to experience financial difficulties in repaying the bank loans and staffing the Observatory. In December 1980 the State Parks Commission agreed to purchase the site for the bargain price of $100,000 (about $340,000 today), which paid off the Corporation creditors. The Parks Commission assumed full operation on July 1, 1981. The Corporation then transitioned to become the Friends of Goldendale Observatory, which helped to support the mission to further public science and astronomy education. For almost four decades, the Goldendale Observatory State Park has provided public education and views of the heavens with a full-time Interpretive Specialist, part-time Park Aids, as well as volunteers. The Goldendale Observatory was named as a State Park Heritage Site in 2014.

In 2010 the Goldendale Observatory was awarded one of the first International Dark Sky Park designations by the International Dark-Sky Association. In 2017, the IDA revoked the Observatory as a Dark Sky Park due to the failure of State Parks to meet its responsibilities for dark night sky education and the promotion of its conservation, as well as noting the apparent lack of support by Goldendale and Klickitat County for conservation of the Observatory's night sky.

From 2015 to 2019, the Observatory received telescope upgrades and a major renovation and expansion with public costs totaling almost $6 million. While the historic 24 inch telescope and its dome building structure remain intact, the rest of the facility was demolished to make way for a larger and more modern building with improved infrastructure, more interpretive displays, new landscaping, and enlarged parking capacity. 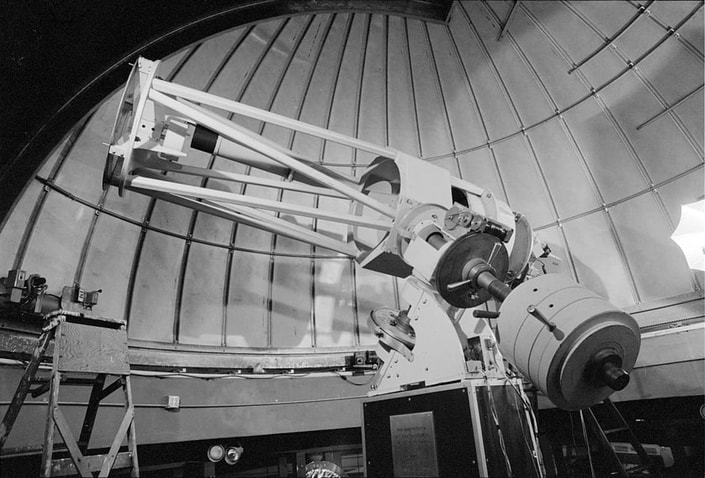 The completed telescope installed in its new observatory. 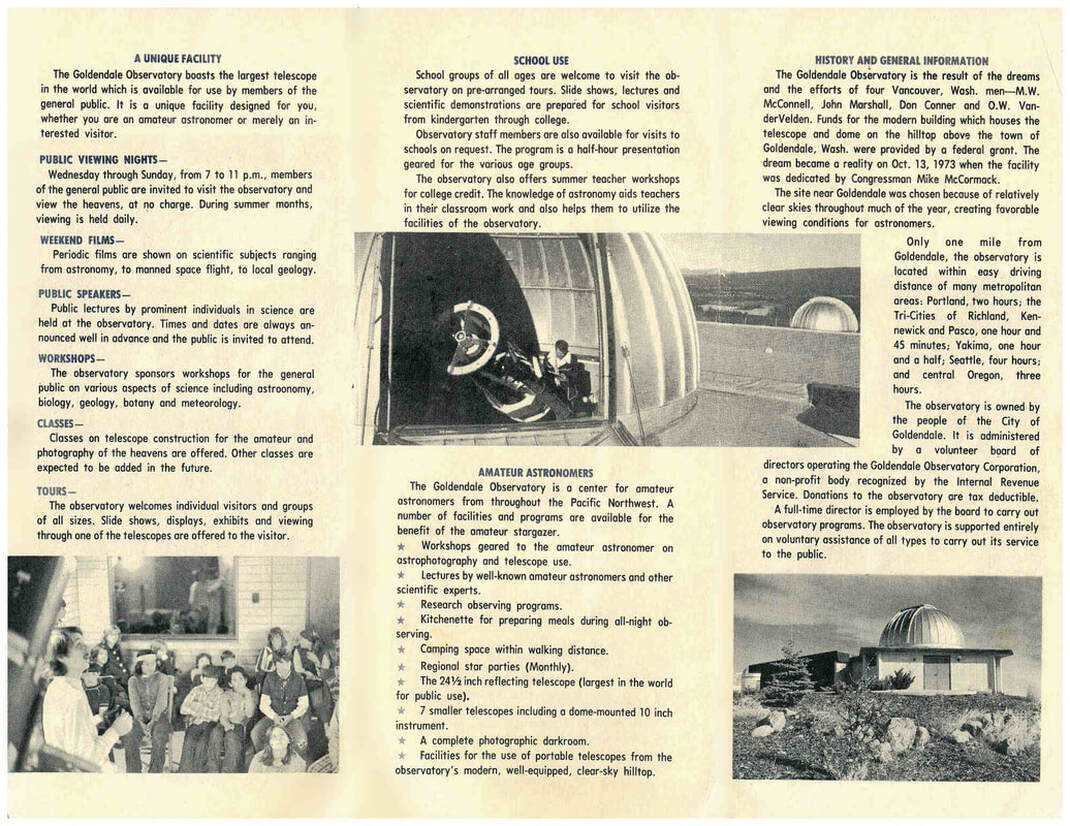